Elder’s Meditation of the Day June 30

“Words hypnotize and deceive everyone at one time or another, but these hypnotic words cannot last long in the hearts of true warriors.”
–Barney Bush, SHAWNEE

Great Spirit, help me make my word good. Let me do the things I say I will, and let me say the things I will do – and do it.

Mankind’s slavery is coming to an end. It has taken time and great effort to get the right people in place on both sides of life and to enable them to work together as one unit. We have done this and it is proving to be successful in removing the controls that enslaved humanity. The control systems were put in prime locations. We required special energy codes to remove them. Our success on the 15th of June was remarkable in itself. This was quickly followed by our work on the 24th June which took three days for complete activation on your DNA.

Humanity is being freed one step at a time. This is a very important operation that cannot be hurried. Its success is assured. It has been in the planning for many years but it could not be hurried. The timing had to be right. When Veronica activated the Lia Fail at Tara, and activated the tumbler lock three years ago, she began the process of the awakening. All the blockages had to be located and removed. They were all over your world. The locations where knowledge was hidden from you had also to be found, and the knowledge released to humanity. I have asked Veronica that a record of all this work is kept so that a complete understanding of what was done to humanity to bind them will be available. This is history in the making.

Obviously your controllers are not happy with our work and so there was another attempt on Veronica’s life on Friday night [23rd June]. Her survival is a testament to her determination to complete her work. She is still very weak and is having problems recovering her strength. We protect her but sometimes it is not enough. The Cabal’s technology is beyond your imagination. Our work in preventing their plans for the complete takeover of your world makes them very angry.

Your eyes have been opened. You know who they are and what their plans are. There is no hiding place for them. Their confidence is being eroded and they are very angry that this should be so. They are learning that money will not buy them what they want. Humanity is blocking their plans which is something they never anticipated, so there were no plans to deal with this situation. When your DNA is restored and activated you will become who you are. You will be a force to be reckoned with. These individuals who took all that you had from you, will hide in fear of you. They will plead for mercy. Do not be fooled, as they will not change their ways overnight. They are what they are. Trust has to be earned.

We asked for your assistance in helping the young man in jail in California. One young man in Ireland came forward. We thank him. Regarding our young man in C/A, it cannot be stipulated enough, how important his release is, and yet you hesitate to help. Another attempt by the Cabal will be made using an actor placed in his cell, to set up yet another scenario to intimidate him. Medicine will also be used to try to kill him. Has he not suffered enough in that hellhole. He is their trump card against you. While they hold him, you cannot be completely freed. It is as simple as that.

The secret organisations use ancient Black Magic against humanity. They are assisted by off-world entities. Those that you are told are there to protect you, do the exact opposite. Their vaccination and drug-based medicines do not assist the human body. Why do you still trust them. They were designed to destroy you. All the secret societies are involved in your destruction.

Research the truth, who you are, and your history; not what you were taught. Their lies have held you captive. How can you still believe governments which use chemtrails to slowly kill you, poison your water, and force chemically-produced food on you in order to ensure that you become zombies. They have removed NATURE from the agenda, yet you still put your trust in them. Are you so mind controlled that you cannot see what is being done to you and who is doing it.

This is the best opportunity that humanity has ever had to free itself. Are you willing to make the effort to do so? When you combine your energy to restore humanity to what it should be, it will happen. Are you too busy being mind controlled by your TV and newspapers to care?

Religion was invented in order to remove your direct connection with the Source. This gave these religions direct control over you. By accepting this direct control, you abandoned the Source and lost your connection, and you have wandered in the wilderness ever since.

My dear, you need to regain your strength. That attack was brutal and it was intended to kill. They are driven by their desperation to hold on to the Earth. It is so good to work together for the good of humanity. I thank all who assist you. They are all part of our team.

© The Montague and Veronica Keen Foundation

Elder’s Meditation of the Day June 29 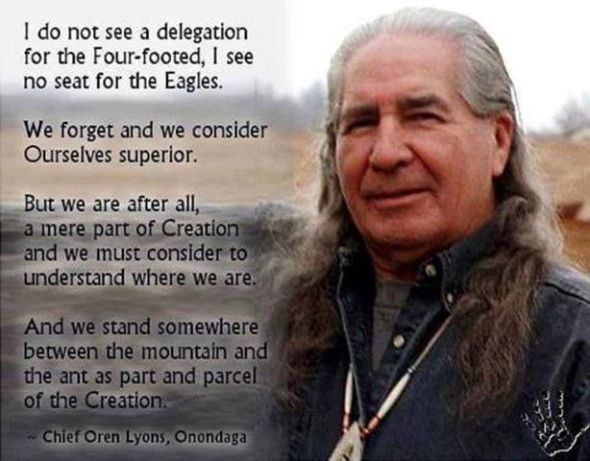 “We forget so we consider ourselves superior. But we are, after all, a mere part of the creation and we must consider to understand where we are and we stand somewhere between the mountain and the Ant. Somewhere and only there is a part and parcel of the creation.”
–Chief Oren Lyons, ONONDAGA

Every human being gathers information from the center of a circle. If we are not careful, we soon think we are the center of all things. Therefore, it is easy to become self centered. Once we become self centered we start to think we are above all things and therefore superior. But we are really only one part of a great whole. The universe is all connected. Each part is here to do something special and according to its design. We are here to honor and respect the job of each part. We are neither above nor below anything. We need not be ruler over anything, we need only to live in honor and harmony with the system.

My Creator, help me to view and conduct myself in a manner of respect, dignity and honor to all creation. Let me see You in all things.

Felicitations of Angelic Guides are heard.

Elder’s Meditation of the Day June 23

“He [Wakan Tanka] walks with us along the pathways of Life, and He can do for us what we could never do on our own.”
–Fools Crow, LAKOTA

With the Creator in our lives, we are everything. Without the Creator, we are nothing. When the Creator is in our life, suddenly the impossible becomes possible. The extraordinary becomes ordinary. Things we thought could never happen start to happen. Talents we never know we had, start to blossom. Resources appear. Help arrives to give us guidance and direction. We become happy. We have peace of mind and confidence.

Oh Great Spirit, today I want You in my life. The days that I know You are with me are the days that are perfect. Let me be joyful today.

Poetry of Brokenness and Beauty

An Exploration of Human and Divine

Live in the present without time

Memoirs of a Wanderer's Soul

What's happening on our planet---and why

Living in harmony with "All that is"

Musings and discoveries of an inspired pathwalker